Biographies of The Farleys

Read more about the brothers 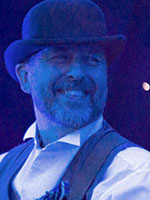 Brother Charley was out toiling in the fields one day when he heard the voice of God.  It said “Form a band from your brothers and play swing/skiffle/country/rock”.  Even God doesn’t know how to categorise our music.

He ran into the farmstead and excitedly shouted "Ma, Ma!  I've just heard the voice of God!" to which the sage Ma Farley replied "You still need to wash your hands before supper, Charles Humperdink Inglasias Farley".

After supper, Ma brought down her chest of old songs from which the brothers now draw their musical inspiration. 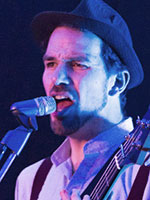 It’s often been said that if it weren’t for his pivotal role in The Farleys, brother Adam would be a social outcast.  It’s not that he has any personal dysfunction, it’s just that nobody likes him.

His mastery of music is unquestioned, unlike his sexuality, and it is the inspirational guidance of Brother Adam that keeps The Farleys on the skiffle straight and narrow.  Without his swing compass they would be adrift on the ocean of easy listening.  Lord have mercy! 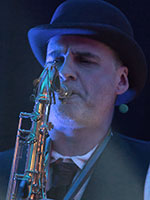 As a small child, Brother Bruce was bitten by a saxophone and from that day has been observed to have special powers; he can play a tune on practically any instrument.  Sadly that tune is Agadoo and of no real use to man.

A constant disappointment to Pa Farley, Bruce was never able to play more than one instrument simultaneously, although several drunken attempts and visits to Accident and Emergency pay testiment to his determination to make it a reality. 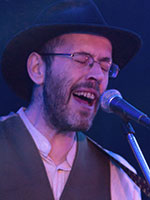 Bizarrely the only Jewish member of the Farley family, it’s Jason’s job to keep his banjo out of tune to give the Farleys that authentic ‘caravan jazz’ feel. Jason in fact studied at the Royal Academy of Music and has had to throw away years of training to sound this bad.

In his early years he showed promise as a playwright, poet and stand-up comedian, although Pa Farley had the foresight to beat that out of him early on with a copy of The Old Testamente of the Good South. 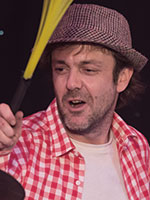 Hailed as the world's most life-like animatronic drum machine, JW was constructed by Brother Adam from gaffer tape and bits of left-over drummer.

Very shy and retiring, JW shuns the spotlight and every performance has to be bribed into playing the drums with copious amounts of Guinness. At least, that's what he tells us.