The Farleys at Red Lion Godalming

The Farleys at Red Lion Godalming

The Farleys are back in town for their third gig at the Red Lion.  The first one was fantastic, the second was absolutely mental, so the third is likely to be monumental - don't miss it!  Here's the official press release: 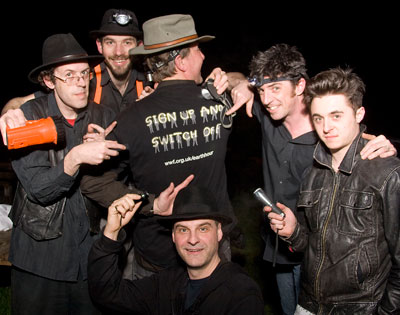 The farleys will be shining torchlight on the WWF's “Earth Hour” in their next big show on the 26th March at the Red Lion, Godalming. This “Earth Hour” party will start with a torchlit perfomance followed by the full stage lights and normal Farleys Slapstick Swing & Pop.
The Brothers would like to highlight the WWF's “Earth Hour” campaign, where people across the world will turn off lights to raise awareness of environmental issues. The band are no strangers to dancing in the dark, Jay Farley adds ”There was no power on Ma & Pa's farm, so when we was all growed up we had to learn to use the electric-light, besides our gigs are usually full of people dancing like no-one's watching!” The award-winning band will be playing skiffle-swing versions of pop and classics from 9 'til 11pm. entry is free.